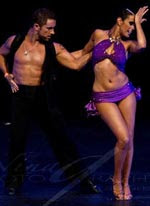 Synonymous with Bachata and Salsa in Australia, Nestor (one of the founders and Directors of the Sydney International Bachata festival) and Katrina have taught Salsa and Bachata all over the world and Australia.

Nearly every corner of the world has been exposed to their funky and fun style of Bachata which encompasses many styles fused to make them one of the most versatile bachata couples in the world.

Recognised for energy, flair, fun and musicality in their choreographies, Nestor and Katrina between them are multiple Australian Bachata and Salsa, Asian Salsa and now also World Bachata and Salsa champions!

Their Workshops are second to none as their uncanny humour and amazing teaching ability always leaves their students on high, having learnt and had great fun at the same time!